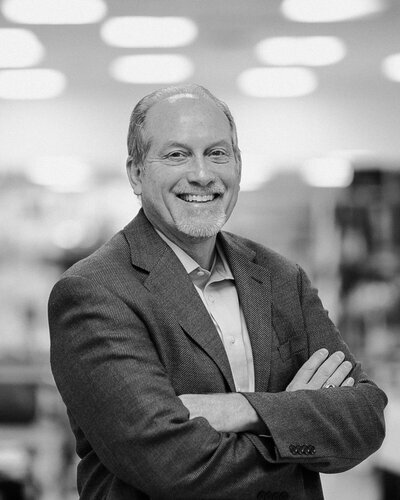 Dave's 38-year career in manufacturing started in 1983 with Litton Industries Guidance and Control, hired as a Manufacturing Analyst to design and implement a real time tracking system for job costing, he was promptly promoted to Manufacturing Supervisor and later as Manufacturing Section Manager responsible for building PCBAs, Mechanical subs and Cables for various programs including F15, LN15G, Ships and PADS. At the time the Factory had 650 employees.

Dave then joined ESAM in 1985 and during his tenure there Dave worked in and/or managed every discipline within the company from manufacturing to finance. Beginning his career there as Manufacturing Manager and now as President/CEO of the holding company responsible for ESAM (HUBZone Small Business, Grants Pass, Oregon), Silicon Forest Electronics (Small Business, Vancouver, WA) Bay Computer Associates (BCA) (Small Business, Cranston, Rhode Island) and EEI Manufacturing Services (Small Business, Clearwater, Florida). All the companies in the portfolio provide "value added products and services in industries/niches where engineering support, supply chain expertise, and manufacturing/quality certifications are critical to mission success.

Dave currently sits on the IPC/WHMA board of directors (ESAM was a founding member of WHMA in 1990 and was active in working on creation of the IPC620 workmanship standard). Is a past member of Abbott Hospital Products Supplier Council and worked with GDMS during 2012-2013 lobbying congress for Manpack and WIN-T programs to ensure funding priority. In his spare time, he enjoys travelling with his wife of 40 years (Jackie), two boys and their families; as well as, hunting, fishing, playing golf and woodworking. He currently serves on his church council and the board of Academic Masters, a local charity.

Mr. McCall serves as an integral member of the EEI Leadership Team. As Chief Operating Officer he is responsible for managing all hands-on operational aspects of the company including strategic planning, efficient resource allocation, establishment of new and improvements to existing operational processes, implementing company strategy, managing departmental operational goals, and ensuring overall organizational activities are aligned with contractual and legal compliance. He is also a key contributor to the development of the organization’s overall strategic goals, company vision, leadership, and team development.