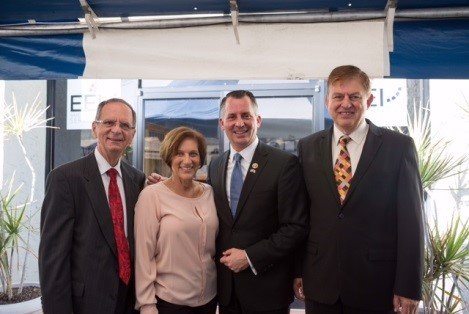 The 33-month contract, which was officially approved Sept. 29, 2015, allows Raytheon to provide mentoring to EEI Manufacturing in the areas of advanced manufacturing products and services.

“We are excited to work with Raytheon and learn from this technology and innovation leader,” said Sue Englander, EEI Manufacturing president at a ceremony today commemorating the Mentor-Protégé agreement. “The knowledge and technology transfer provided by Raytheon will allow EEI to advance our design to spec services and provide much more complex manufacturing and integration capabilities.”

The Mentor-Protégé Program incentivizes contractors to assist small businesses in enhancing their capabilities, and increasing participation of such firms in government and commercial contracts. The Raytheon and EEI agreement was endorsed by the Naval Air Systems Command (NAVAIR).

“The Mentor-Protégé Program is an integral part of Raytheon’s sourcing strategies,” said Vince Hrenak, vice president of Supply Chain at Raytheon’s Space and Airborne Systems. “By investing time and energy in EEI Manufacturing, we are contributing to a stronger supply base for Raytheon, the U.S. Navy and the Department of Defense.”

“This agreement is a win for EEI, Raytheon and the people of Pinellas as it may lead to additional jobs and a stronger economy. The Department of Defense has long, and rightfully so, recognized the knowledge and skill of the Pinellas County workforce. EEI Manufacturing President Sue Englander deserves praise for her tireless effort in making this agreement happen,” noted Congressman David Jolly (FL-13)

About the DoD Mentor Protégé Program

Since 1991, the Department of Defense (DoD) Mentor-Protégé Program has offered substantial assistance to small disadvantaged businesses through the assistance of prime contractors like Raytheon. Enacted in 1991 under the direction of former Senator Sam Nunn and former Secretary of Defense William Perry, the DoD Mentor-Protégé Program provides incentives for DoD prime contractors to mentor small disadvantaged businesses and women-owned small businesses, so they can better develop the technical and business capabilities to become valued suppliers for the defense industry.

Read More on this Article Here.