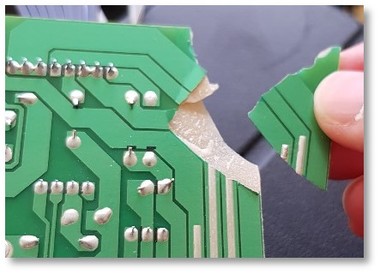 Have you ever experienced circuit board damage or failure?  This issue occurs everyday in manufacturing for many different reasons. In our IPC-A-610 class, students learning the importance of handling boards during production in order to prevent faulty circuit boards.  Listed below are a few examples of common causes for faulty circuit boards, and ways to prevent them from occurring.

Thermal shock is defined as a mechanical load caused by a swift change in temperature of a certain point, and causes different areas of an object to expand by differing amounts.  The expansion can cause the object, or in this case a circuit board, to go under high stress and strain levels that will result in damaging the board.  When it comes to circuit boards (PCBs) some damages from thermal shock are not always visible and can lead to the failure of the board itself.  Ways to prevent thermal shock include:

If you have worked with surface mount components on PCBs, then you have most likely used a reflow oven.  A reflow oven is primarily used to apply melted solder to form solder joints on surface mount components when the circuit board is heated.  There are four zones in the reflow profile process: preheat, soak, reflow, and cooling.  Each zone requires to be at specific temperature settings for heating and cooling.  If the reflow profile is not adjusted properly it can lead to defects or damage the board.   Ways to prevent improper reflow profile include cleaning the reflow oven from debris, setting the proper time and temperature during preheating and reflow stages, and allowing the cooling rate to match the heating rate during reflow for proper solder joint formation.

Board Damage by Handling

There are many elements that can cause circuit board damage while handling.  Here are a few common causes: